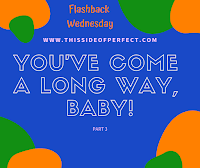 This is the third installment of my homeless series that I wrote several years for the holiday season. It's not the holidays - YET. But you know it will be here soon. ABC Family has their 31 Days of Halloween and then Hallmark will begin their Christmas movies on November 1st. It's coming guys and it seems like it gets earlier every year.

So, without further ado - Part III.

First, if you've ever received help from the community, know this: getting help around the holidays is really hard. That's why I encourage anyone who gives, to give especially well during the holidays - your efforts will not go unnoticed.

Second, and it's only now that I can vocalize this - I was really messed up as a young adult. I was never one for drugs or heavy alcohol use (alcohol doesn't agree me...and I don't care for it much, either). I wasn't a troublemaker by the regular definition. I just wasn't completely 'there' mentally.

My Little Bro and I were raised by my mother. Like most children who live in single-parent homes, we became very close to our mother. But no matter how close you get to a parent, that one parent cannot possibly take the place of two. So, as a result, I always felt as if there were a father figure missing from my family equation. (Well, of course, there was - my mom was a single parent. But I really didn't have ANY positive male role model while growing up).

So, somewhere along the line, I got this strange idea that when I got older, I wanted a guy to take care of me. It probably stemmed from the fact that I saw my mom struggle so much by herself. What I failed to realize, however, is that life is a struggle no matter if you're alone or with someone for life. In many ways, life IS struggle. Still, in my 20 yr old mind, I decided that the Man Beast should take care of me and our son; no matter that Man Beast was just a child himself at 18.

Anyway, back to my story.

The Man Beast and I were beat emotionally. We were both physically exhausted and it pretty much goes without saying that our spiritual life was dead. There is nothing scarier than feeling like you're all alone in the world - even if you're surrounded by people. The Man Beast's boss at the Pawn Shop was a pretty good guy. He knew our plight. The Pawn Shop had a regular customer - he was a preacher. Somehow, some way - the week after Christmas, we were out of hotel housing and living in a double-wide trailer split in half (I'll give you a second to process that. A double trailer. Split in half. A family living on each side. Small? Yes. But better than a hotel).

I later found out that The Man Beast's boss had given him a Christmas bonus even though he hadn't worked at the Pawn Shop for very long. The preacher had loaned The Man Beast money. We paid him back with TMB's next paycheck.

I'd like to tell you that at this point in the story, things magically got better and everything turned out happily ever after.

No. But this is where my story, for all intense and purposes ends.

And why do I air 'my dirty laundry' as I've heard it referred to on other blogs? Not for you to feel pity for me. Certainly not.

But what I do want you to feel is the knowledge that there are people out there - at this very moment, in your very community - who are struggling like I did with my family nine years ago.

Just because someone is in a homeless shelter does not mean that they are alcoholics, strung out on drugs or 'lazy bums'. Many times, these are people who are just down on their luck. And for someone reason, when it rains, it pours. Many would call this The Rule of Three or Karma, but since I'm a Christian, I don't believe in any of it.

What I do believe is that it's so much easier to kick us when we're down. It's easier to lose hope when we're already down, too. This is why it's so important to reach out to people when they are hopeless and give them hope.

Especially in our trying economic times.

Did you know that homeless shelters are filling up with MIDDLE CLASS; men and women who have college educations, have lost their jobs and are now too qualified to get even the simplest of jobs? It's true.

So during this holiday season  I encourage all of my readers to put money in that red bucket. (And yes, I consider Halloween the beginning of the Holiday Season. Thanksgiving is just around the corner! Christmas will be here in the blink of an eye and it will be 2019 before just. like. that.) Do not avert your eyes at the bell ringer, pretend you're digging in your purse for something, or go out another door to avoid them. The Salvation Army's donations go to good use. When you walk by an Angel Tree, pluck an angel off and shop for that child.

I know times are tough. Even little things help. Next time you go to your local Dollar Tree to buy stocking stuffers for your kids, buy an extra toy or two and plop it in the donation box by the door. Literally, every little bit helps. Sounds trite, but it's so true.

One last thing - as you gather around your tree, opening gifts or around your dining room table, feasting on your bountiful (or not so bountiful) harvest, take a moment to send out a prayer to all of those who might be going through some things this year. I know two of my readers offhand whose Christmases might not be as merry as years past. But they surrounded by family and friends who love them.