Life as a Paraprofessional vs. Life as a Teacher: Part 2

To read about the first part of my journey on the road to becoming a teacher, please click here.
**** 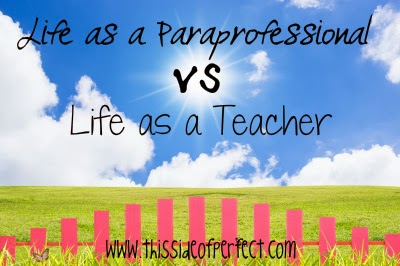 So, here I was, gainfully employed. In a position where I didn't have to wait for a phone call every morning telling me where I was to be working. I knew. I was working at the Middle School Down the Street.

I had no clue that taking this position would lead me on such an incredibly journey - but it did.

My first job as a paraprofessional was working in a self-contained classroom, serving students with severe and profound intellectual abilities. Many of them were non-verbal and some of them could not walk.

The first couple of months were challenging. Nowhere in the world will you find a room full of students with hearts more pure - or honest. If they like you - they love you. But if they don't - well, sorry about your luck. Naturally, it took some time for me to find my niche (both with them and the teacher with whom I worked).

But find my niche and I did and soon, I felt a yearning in my heart that I had never felt before. I decided soon after I started working with those Special Kiddos that I wanted to go back to school to become a teacher. (Admittedly, this was not my first round at a college - or at education. But this was the first time I had ever considered special education. And to be honest, I don't think I would have ever given special education a thought if not for working with these kids. But like has a funny way of working out. Not only would I become a college educated woman working with children with special needs, but my daughter would be diagnosed in the middle of it all.)

I began my studies online through Grand Canyon University. A representative came to the school and spoke with many individuals about various degree programs they offered. For one reason or another, they never spoke with me. But I did speak with a co-worker who spoke with them and went online to do some research. I filled out my information and was contacted by Michael - my enrollment counselor.

Online classes tend to be accelerated. As such, I took one class every eight weeks. For two semesters, I took two and it was a challenge. Still, after all was said and done, in four year's time I had a bachelor's degree in Early Childhood Education/Special Education. (I had to quit my job at the middle school in order to complete 16 weeks of student teaching. While completing it, I had the opportunity to work with a lot of great students and a handful of great educators).

Before I finished, I began putting in applications anywhere and everywhere I could find a position open. After talking teachers, I decided that I shouldn't narrow my search to just local schools, but instead, should branch out an hour in each direction. (It wasn't ideal by any means - but my chance for success was greater by spreading my search field.)

Even while I was putting in applications, in my heart of hearts, I knew I didn't want to take over a classroom mid-year. I felt it would be too much of a challenge and to be honest, I just didn't want to do it. I briefly contemplated working as a sub for the school system to keep my name "in the system" but in the end, I didn't have to: I was hired on as a paraprofessional at one of the elementary schools where I completed my student teaching. (I later found out that many teachers begin their teacher careers as paraprofessionals, waiting for positions to become available).

Long story short, one became available, I prepared for the interview with a lot of input from fellow teachers, and was offered the position.

After 7 months as an educator, I can report after being on both sides of the fence that my Life as a Paraprofessional varied greatly from my Life as a Teacher.

Stay tuned for the conclusion of Life as a Paraprofessional vs. Life as a Teacher