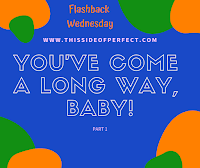 In an effort to get back to writing regularly (whether or not you read this - but I'm happy if you do!), I figured I would re-publish a few older posts that seemed to really engage my readers.

I will start with a series I wrote several years ago about how far The Man Beast and I had come as a couple and a family.

One Christmas, we were homeless.

It was eighteen years ago. The Boy had just turned two. My world as I knew it had just fallen apart. My folks had divorced after six years. My mom moved away and there wasn't much going for us in VA. The Man Beast and I had been together for two years and while we were deeply in love, we were still babies trying to live in a grown-up world.

It all started out innocently enough. A shut-off notice here. A burned engine there. Eviction notices bounced us from apartment to apartment. Eventually, we lived in extended stay hotels. We learned that the Salvation Army had a program for families. They provided a furnished apartment for down-on-their-luck families. The Man Beast was working at Busch Gardens Williamsburg (now Busch Gardens Europe). He was informed that he could transfer down to FL and get a job at Busch Gardens Africa (formerly The Dark Continent). We figured things were a total bust in VA, so it was worth a shot.

So, while The Boy and I were living in the Salvation Army sponsored housing, The Man Beast went down to FL to get established. The plan was he would work and get us a place to live and we'd head down there in a month.

You know what they say about the best-laid plans, right? They went south - quickly.
The Man Beast got down to FL only to find that the paperwork had failed to go through, so he was down there without a job and without a place to live.

One night, The Man Beast had decided to stay at a cheap motel. He woke up the next day to find the car broken into. All of our belongings (except for The Boy's and my clothes, which were still with us up in VA) were gone. Forever. After what little money Man Beast had run out, he lived out of the car.
He hopped from rest stop to rest stop until the cops finally told him to stop. He still did it; he just stayed out of the cops' radar.

The Man Beast eventually did get a job at Disney. He saved a bit of money to buy The Boy and I plane tickets. In the process, he became desperately sick.

Because he needed to work to make money, he muddled through working. He stopped eating because he was so sick and because he didn't have enough cash on him on a daily basis. Eventually, he saved enough money to buy two plane tickets for The Boy and myself.

A month later, The Boy and I flew down. We couldn't stay any longer in the Salvation Army sponsored apartment because I had already given notice that we were leaving. Besides, with it being the holiday season, there was a waiting list for our apartment.

I remember the afternoon we got off the plane well. We flew into Orlando on a little plane that was very crowded. I had The Boy's car seat because he was still so young. There were six other passengers on the plane. I remember trying to carry the baby, my purse, a diaper bag, and a car seat. I also remember bumping into a business lady on the plane as I was trying to exit and her giving me a dirty look.

I just wanted to cry.

It had been a month since I saw The Man Beast - the longest we'd ever been apart since we had been married. I missed him terribly and I couldn't wait to see him. When I finally did see him, I hardly recognized him. He had lost so much weight and looked very, very bad. He asked if I had any money on me and when I told him yes he said, "Let's go eat."

We had Denny's that day. It was wonderful to have the family back together again. But the feeling was short lived.

The question remained - where would our family live? The Man Beast was still living out of the car.  We obviously could not all sleep in the car (although now that everything was stolen, there was a bit more room in our two-door Dodge Shadow).

The answer was very, very bleak.