Why I Chose to Medicate My Daughter 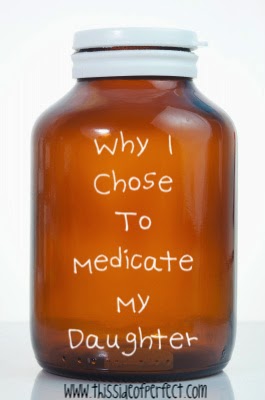 But allow me to back up; especially those who might not completely understand the disorder, what it means for my family, or how medication plays into the whole story.

Baby Girl was born bright and early one Wednesday morning. Her birth was very similar to The Boy's in that it wasn't terribly long, it wasn't terribly traumatic for her or me, and my nurse midwife was very knowledgeable in allowing my body to do what it was meant to do and her and the other medical staff pretty much keeping their hands off the process. The result was a quick healing process for Mom and a relatively predictable routine for Baby Girl.

It actually started in the hospital (and it's only now, looking back that it seems so obvious). Both of the kids slept with me in the room. I felt it was easier if they were with me to establish a feeding schedule and insure that my milk came in. Besides, I had read horror stories about babies being stolen from hospitals and I wanted to make sure that I left with the same kid I gave birth to. Call me paranoid; I was.

Baby Girl slept a lot after she was born. Where The Boy literally scooted up my stomach to eat after being born, Baby Girl went straight to sleep. On the rare occasion she woke up, she would fall asleep at the breast. Emptying both breasts at a feeding never happened (in or out of the hospital). I remember getting fussed at by the nursing staff that I needed to wake her up in order to eat. When I did, I got a fussy baby who fell asleep at the breast. Eventually, I left her predict her feeding schedule.

In the end, she predicted everything. Whereas The Boy would sleep anywhere when it was time for his nap, Baby Girl would only sleep in her bed. Not in a booster at a restaurant. Not in the car in her car seat. In her bed. End of story.

Baby Girl didn't talk. She would babble and her big brother would interpret what she wanted. I had always heard that younger siblings typically didn't talk as early as their older siblings because they didn't need to. However, at her 18 month check up, the pediatrician started asking me questions about her speech. When I told him she wasn't speaking much, if at all, he referred us to a wonderful early intervention program and we were blessed to work with amazing women who had Baby Girl signing and saying "b" within the first few visits.

Yay, she's talking and communicating! It's smooth sailing from here!

I was thankful that I was able to stay home with both of the kiddos while they were very young. But, there came a point where, financially, we just couldn't do it anymore and I needed to go to work to help my family make ends meet. The Man Beast and I decided to put Baby Girl into Head Start.

For the first two weeks, she cried non-stop. I was told by her teachers that this was normal and she'd get used to it. Yes, she eventually stopped crying, but she was always frightened, shy, and generally fearful. Any (and I mean any) deviation from a normal schedule would send her reeling.

Still, the teachers didn't see anything out of the ordinary.

After Baby Girl graduated from Head Start, I placed her in a lottery-funded pre-k center. Overall, she did well, but she was still frightened, shy and generally fearful.

Still, the pre-k workers didn't see anything out of the ordinary.

Soon after, we moved to another city when The Man Beast got a promotion. The first day at school was dismal for The Boy and we ended up homeschooling for the next three years. That journey came to a close and The Man Beast and I enrolled the kiddos in public school in November of the boy's 4th grade year. Baby Girl was in 1st grade and it was her first exposure to public school. The classroom sizes were larger than she'd ever experienced and she was lost and frightened. More days than not, she had meltdowns. Her teachers (wonderful, wonderful women), I'm sure were at a loss of what to "do" with her because of this. I talk to teachers now and they mention how mature Baby Girl seemed. They admitted she was shy, but they never had to worry about her following the rules or doing what she was told.

They only thing they did have to deal with her were meltdowns she had due to other students not following the rules or doing what they were told.

Still, all of her wonderful teachers didn't see anything out of the ordinary.

And then comes that fateful weekend when Baby Girl went to a local amusement park with her Girl Scout troop. As part of the outing, the girls swam in the pools and slide on the slides in the adjoining water park.

I did not go with her on the outing and was interested to hear how her day went, but I knew something was wrong when the scout leader and co-scout leader pulled me aside and started asking me various questions.

Evidently, Baby Girl did not do well at all during the outting. When they got a snack, she went into a meltdown that what they were throwing away was wasteful. When it was time to change into her bathing suit, she went into another meltdown.

We were new to the Girl Scout family, so I don't fault them for the questions they asked. Were The Man Beast and I going through a divorce? Was there abuse in the home? Were there drugs or alcohol in the home?

Again, I do not fault the ladies at all for their line of questioning. In fact, I welcomed it because it showed they cared. Of course, my answered to their questions were, "No", but the question remained: why did Baby Girl act the way she did?

The next year, I admit, is a bit of a blur. We saw a few doctors, including psychologists. We finally found one that really seemed to listen and one, amazingly enough, Lynne seemed comfortable with.

Her first official diagnosis was Social Anxiety Disorder. A diagnosis didn't suddenly cure her, but it did make both of us feel better. Even as a young child, she had something she could hold on to and make limited sense of as to why she felt the way that she did.

Soon after she was diagnosed, I went to work for the school system and went back to school. I worked in a special education classroom where students had various diagnoses, including Autism. The lead teacher in the classroom had been working for quite some time and was very knowledgable in the field of Autism. (She later told me that the very first time she met Baby Girl, she knew she was on the Spectrum. She didn't tell me, she said, because she wasn't sure I would be willing to hear it).

After working with students with Autism and completing course work in college on Autism, I began to study more about the disorder. And the more I studied, the more I thought something else was going on with Baby Girl.

We went back to her psychologist (he had released us after six months of visits) and I explained to him that I felt like there was more going on in Baby Girl's brain than just social anxiety. He agreed that he would re-evaluate her and his conclusion was the same as mine - PDD-NOS (pervasive developmental disorder - not otherwise specified)/Asperger Syndrome.

Now that he had a new diagnosis, he took Baby Girl back onto his caseload. He also changed his approach and how he coached her in how to handle things. It was actually Baby Girl who discussed medicine.

Her psychologist referred her to a psychiatrist. She disagreed with the Asperger Syndrome diagnosis, but fully supported the PPD-NOS one. She agreed with Baby Girl that medicine might help.


Baby Girl was relieved; I was worried.

Still, the Man Beast and I felt it was important for Baby Girl to not only have a say in her therapies, but also that she feel she had a sense of control - an element that had been lacking in her life and was, therefore, hugely important to her.

Her doctor placed her on a very mild anti-anxiety medication and requested a follow up in a month. We went back and the doctor asked Baby Girl how she was feeling.

When the doctor inquired further her meaning, we discovered that Baby Girl felt like she was abnormal because she had feelings and she was under the assumption that "normal" people not only didn't feel what she felt, but that they didn't feel at all.

The doctor was speechless and I was heartbroken.

The doctor reassured her that it was normal to feel things and the reason why she was on medication was to help her gain control of her feelings. (Baby Girl's mind is very analytical. She wants to know the "how" and "why" of her world in order to make sense of it. This helps her gain control.)

She's been on medication for two years now and due to various circumstances, has had to have adjustments made in her dosage. She seems both doctors on a monthly basis and talks with them quite openly about what is going on in her world. With their help, she is learning to cope with the everyday events of middle school. She takes her medication at the same time every night. It helps her sleep and helps her get through her day. She knows when she skips a dose because she feels the anxiety come back in a wave.

She will be the first to tell you that her medication helps her manage her life. It does not turn her into a zombie. It does not make her suicidal. It takes just enough of the "edge" off so that she can function.

What her medication does, however, is allows her navigate the "normal" in her life while maintaining control. As a result, she has fewer meltdowns in school. She has made a handful of good friends, with whom she's quite candid about her difficulties and who, God bless them, help "talk her down" if she's having a particularly bad day.

Everyone's choice to medicate or not to medicate is an individual one and I encourage anyone considering the option to do their homework. But I hope that by sharing our journey, I've shed light on a controversial issue that has a happy ending.