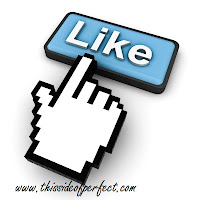 We love to hate, don't we? Today is a classic rivalry football game between the Florida Gators and the Georgia Bulldogs. Not being a football fan myself, I really couldn't care less who wins or who loses, but that doesn't stop the friendly (and sometimes, not-so friendly) rivalry that exists between these two teams.

The same can be said for television shows. First, there was the vile hatred toward the Jersey Shore. But were people watching it? You betcha. Currently, there is a heated debate about the new TLC show, Here Comes Honey Boo Boo. Like most shows on TLC, it is a train wreck. Southerners (especially Georgia Southerners) complain that HCHBB gives Southerners a bad name. They argue that this show perpetuates the Southern stereotype of ignorance. But is this show being watched? Yes! Maybe they watch just so they can complain.

The point is, we like to complain. We like to gripe. But rarely, do "we" do anything about it.

Take Facebook for example. Many people have a love-hate relationship with the social media giant. Facebook is now traded publicly and oh boy did people have something to say about that! They argue (and rightly so) that they want their information kept private. But they also dog Zuckerberg for being an "evil" billionaire. The man is a marketing genius. You don't have to like him, but you can't argue his success. In my opinion, I believe his linking with other sites, is genius. If you go to a site the Huffington Post, CNN, or even other social media sites such as Flicr or Pinterest, you will have the option to sign up using your Facebook information. This is genius for two reasons: 1) it's a time saver and everyone wants to save time while wasting time surfing the net (it's true!) and 2) Facebook, for many, is a way to share everything they're doing elsewhere on the 'net. "Hey, look at this really cute picture of a cat I found on imagr! I need to share it on Facebook!"

The man - love him or hate him - is making social media work for him. Brilliant.

But, while I have to logically give props to the man for running his business successfully, I, too have hesitations about what I want shared all over the net and you should do. Sooo, this is just a very brief tutorial about privacy settings and sharing options that you can set for your own Facebook. While the old Zuckman is banking on you not adjusting your privacy settings for his own financial gain, there is a way to adjust them to your own liking. You just have to make the effort.

You can actually manage quite a lot if you take the time to do it!
You really do have a lot of control. For example, my personal Facebook page is not public and I only allow friend requests from friends of friends. (It's probably a good time to point out that if you're worried about what people can see, you probably shouldn't have 1,000+ people on your friends list, half of whom you do not know, simply because you want people to play Facebook games with you. Just sayin').

You can then manage which apps, games and websites "see" your information. (I found out recently that you have to read when accepting new apps (duh, right?). What I mean is that some apps go to your default setting (say, "friends"), while others go to their default settings (say, "public"). If you don't want that, you need to pay careful attention and make sure to change it. Common sense, but I think sometimes we get mouse happy and clickity, click, click our way through the web without reading much of anything. 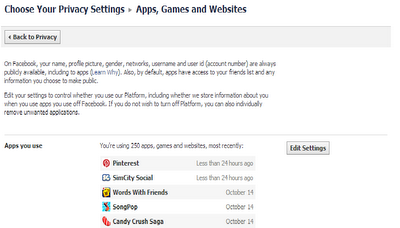 You can also completely block apps and/or people. For those of you who loathe getting tons of game requests, this one is for you! Facebook makes a little challenging in that you have to physically type the game  into the field. I think, however, that if you go to game requests, there is a drop down menu to block game requests from that page as well.

How about that timeline, eh? Love it? Hate it? I recently found this gem as I was taking screen shots for this blog post. In one fell swoop, you can convert old posts on your timeline to be "seen" by the people you choose. For example, I wanted my old posts be "friends only" - meaning, only friends could see it. One word of warning - the changes are permanent. You can't undo the action.

When you delete a previously-used app from your account, you'll get a popup window similar to the picture below. Do you see that box at the very bottom that reads: "Delete all your Sweepstakes activity on Facebook"? Check this box to remove all of your information for that app from Facebook.

Easy peasy, right? Like any cleaning chore, it might take some time to get it "clean" but if you maintain it, it won't take long at all in the future.

I hope this helps some of you who are confused about some of Facebook's settings.

Next on the list - friends of friends seeing what you post when you tag friends in pictures. Hmmm...