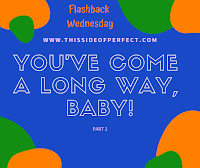 (To read Part I of this story, click here)

The second part of my story is a bit hazy. I'll share what I remember. It will be fragmented, to be sure, but there are just some things you just cannot forget no matter how hard you might try.

Do you know what it feels like to drive in a car and not have a destination? It's not like joy-riding when you're a teenager and you're cruising, using your freedom and your wheels as a chance to escape school and home. Because you see as a footloose and fancy-free teenager, after you're done joy-riding, you have a home to go home to. When you have no home, you have no real destination and no real place to go home to.

This is how it felt for us after we left Denny's. I had some money (although not a lot) that I had brought down to FL with me. When The Man Beast left a month, previous, I had applied for a job at the local CVS down the street. I worked developing film and although I was a 'single mom', juggling work and a baby, I did enjoy the work. It was a chance to forget it all and just be Iva for a couple of hours a day. A chance to forget that my husband was 12 hours away. A chance to forget that while we lived in the Salvation Army apartments, we were, in fact, homeless, even though we had a physical address where we could receive mail.

That first night, we stayed in a motel. We got The Boy some diapers and some sandwich fixings (nothing perishable, the hotel didn't have a fridge).

The money didn't last long. One day, we found ourselves driving aimlessly, burning up gas needlessly. With no money for a hotel and no room in the car to sleep, we went to the only place we could think of: a homeless shelter.

The shelter would only take The Boy and me on one side. The other side was for men. The Man Beast dropped us off at the shelter while he went to look for a job. The job at Disney was a bust. The Man Beast was able to get a job at a local pawn shop but to ensure that we had money nightly, he got a job at Steak n Shake. But more on that later.

The Boy and I only stayed in the homeless shelter one night. But one night was enough. It absolutely killed The Man Beast to know that he couldn't provide for his family and we were stuck in a homeless shelter - hence the two jobs.

The Boy and I got a room to ourselves. There were two sets of bunk beds and a crib. The room was very small. I slept on the bottom bunk and the boy was in the crib. Most of the details are very fuzzy for me. But I do remember that I had a really bad sinus infection. I've never had a sinus infection this bad and of course, I had to wait until it went away on its own because we didn't have insurance or the money to go to the doctor and buy medicine.

I didn't talk to anyone that first night. I remember sitting around the TV, letting The Boy play with some of the other kids and the toys.

The rules were a bit strict. But I suppose they would have to be. I remember getting up in the morning after a very long night. Even though we had a room with a closed door, I had never stayed in a homeless shelter before and I was very scared. (Looking back, I knew I didn't have to be. The people who worked there were nice for the most part. There was one lady who was kind of mean, but again, I think she had to be. The people who were staying there were mostly moms with kids. I people watched and listened to conversations. They seemed to be just like me - just people down on their luck).

The next morning, after changing The Boy, I went out to the cafeteria. What I forgot to bring, however, were all of my belongings. After getting fussed out, returning to the room and getting our things, I went back out to the cafeteria for breakfast. Luckily, it was only the sleeping dorms that were separated. I saw the Man Beast in the cafeteria for breakfast. We had to leave the shelter by 8 o'clock that morning. We were allowed to return, but we'd have to come no earlier than 5 - and there was no guarantee that there would be a bed. They went fast.

I don't remember exactly why but the job at Disney didn't work out. After Disney, he juggled the two jobs. He would go into work at Steak n Shake for third shift, come back to the hotel to sleep a couple of hours and then go work at the Pawn Shop.

To say that life like this was hard is a huge understatement. I did not work at this time - couldn't afford to - so The Boy and I were stuck in a hotel all day long. When Daddy would come home to sleep, I'd have to keep the Boy quiet - no small feat for an active two-year-old.

Looking back, I don't see how we did it. We fought a lot. Tensions were high. It was around that time that I started withdrawing from people other than my son and my husband. I would hold on to this hermit-style attitude for many years. Truthfully, it wasn't until I started taking care of bills and grocery shopping (something I had not done during the early years of my marriage) that I started getting a voice.

We lived hand-to-mouth for three weeks down in FL. Most nights, The Man Beast only made enough in tips each night to pay for the hotel (it was around $50 a night - this was Orlando, after all). Whatever extra money we did have went to feed The Boy. Because it was close-by (and gas was an expense that we had to conserve so that The Man Beast could get to work), we went to Wendy's and Burger King. I remember praying that my boy would get full before he finished his dinner so that I could eat. More times than not, I went without. I'm not sure if The Man Beast ate at work (Steak n Shake) or not. I don't think he did because he was usually very hungry.

I remember vividly two very low points during this time (as if begging that your son wouldn't finish his food so that you could wasn't enough). Save a Lot was right down the street from the hotel. It was there that I bought the Boy's diapers. I remember one instance paying for a pack of diapers (I don't even remember how much they were) and crying when I got back to the hotel because someone had stolen two diapers out of the pack. Instead of taking the package off the shelves, the wise people at Save a Lot, trying to make a buck no doubt, decided to tape up the diapers and sell them at regular price. Being hungry and sleep deprived, I wasn't paying attention and grabbed the first package of diapers I came to.

I remember going to the store (I think it was Food Lion) and buying diaper inserts (do they still make those?), to make diapers more absorbent. I am absolutely ashamed to say that I would save the wet diapers and reuse them with the new inserts. It wasn't until the second round of pee or a dirty diaper, that I would throw it away. Just seeing it in print like that makes me feel that I have ultimately failed as a mother. What mother does this?!

My last memory of this time in our lives was on Christmas. The Man Beast didn't work. We went to eat somewhere - I don't remember where. I think it was a hole-in-the-wall place. In the lobby was a crane machine. The Man Beast is a pro at the Crane Machine. In the 22 years, I've known him, I've never seen him walk up to one and come away empty handed.

This time was no exception. The Man Beast took a quarter out of his pocket and set his sights on an orange dog. He got the orange dog. The Boy loved it.

That year, that Crane Dog was the only gift my boy received for Christmas.

Luckily, most stories have a happy ending, including this one.