It has been just about a year since I started using the Uncalendar my mother gifted me last year. I received another one this year (this time, from The Man Beast). I thought it would be an excellent time to update readers on my usage of the Uncalendar this past year - what worked and what didn't.

If you have fifteen minutes to spare, feel free to click on the link below in order to see the video version of this post.

The Uncalendar Lifestyles Pro is a three-ring binder undated planner that comes in red, blue, or black. I received the full-size version, but the company also provides a half-size version of both the Pro and the regular Lifestyles version. The Uncalendar website has pictures of their products as well as upclose screen shots of the pages. The company also provides a skills center meant to help Uncalendar users get the most out of their planner.

After watching just a handful of Uncalendar videos (seriously, there aren't a whole lot available - at least when you compare to other planners on the market), I learned that one user placed Post It Pockets in the front of her binder. I, too, placed two envelopes in the front of my binder - one which I used for different colored pens and the other I used for Post It flags and tabs.

Around July, I moved the guts of my Uncalendar into my own binder

. It was a binder I had bought from Staples several years ago and at 1 1/2 - 2 inches deep, it seemed to be bigger and have more room in it than the Uncalendar binder. The plastic envelopes did not make it into my new binder because the whole thing seemed too cumbersome.


However, I did get this nifty Post It Note station from Dave and Busters. I thought it would be a great addition to my binder. Unfortunately, the post its and flags started crinkling and falling off. To be fair, I don't know if it was the product or it's the fact that this particular set up won't work in a binder. I have seen similar  Post It Notes systems

at various stores around my community. If, after trying the coil Uncalendar system this year and deciding on going back to the 3-ring binder system, I will definitely be trying this out again.

The first part of the Uncalendar houses the weekly view. I chose to label the three sections "work", "home" and "me". I explained this in my other post and video. It made sense for me to divide my day like this because I woke up - I went to work. I came home and dealt with home stuff. And then I had my stuff - exercise, Bible studies, reading, writing, etc. that I tackled at the end of the day. While I was last on the page, I do not feel that my needs came last, by any means. 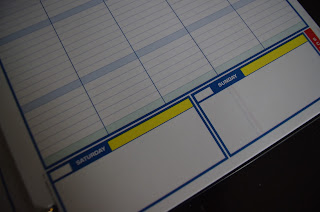 I used a color-coding system in my Uncalendar. At the beginning, it was consistent, but toward the middle of the year, it fizzled out to a very basic color-coding system. Work has always been blue. I've off-set any special education events in red. It's a system that I adopted my first year teaching, it made sense to me, so it's stuck. This was before I even began using the Uncalendar. At the beginning, each family member had their own color - The Man Beast had orange, Baby Girl had green, The Man Child had a variation of blue and I had purple. This system didn't stick much at all. First, the colors didn't make sense. They weren't favorite colors (except for Baby Girl's), so there was no emotional attachment to the colors. I know it sounds weird, but it's how my mind works. Everything has to have significance. If it doesn't, then I want nothing to do it with. (That's an epiphany I just had while writing this out! Amazing how writing frees the mind).

Moving on...
Because my system was new, I developed a key for it. I also used the chart to track habits - at least in the beginning. It, too, fizzled out mid-way through the year.
After seeing a fellow Uncalendar user use the big space on the bottom of this page to track her food on a Post It Note notepad, I adopted the system, too. Unfortunately, what I found was it was just as easy, if not easier to track food directly into my phone. I'm unsure of what I will use this area for this upcoming year.

During the summer months, my Uncalendar hardly got used. I didn't have any work related tasks to track. I didn't set any personal goals for myself in the summer, so there was nothing for me to track for me. Even my home appointments didn't get tracked in the Uncalendar. I found it easier to sync Google Calendar with everyone in the family.  This year, I think I will track habits for me personally in my Uncalendar. This way, it will be used during the summer. Of course, I plan on laying eyes on my Uncalendar much more frequently this year than I did last, too.

Over all, however, most of my summer weeks were kept blank. I believe this is why the people at Uncalendar suggest only filling out your planner for a few weeks at a time. I started doing that at the beginning but what I found was, it was just another item on my to-do list. So, around July (it must have been a magic month) I filled in the rest of my Uncalendar. I will say this: filling it out on a weekly basis did force me to interact with it more than when I filled it out for the whole year. Still, I just do not see myself going back to the weekly system. However, my main goal for the upcoming year is to really utilize the Uncalendar and touch it and interact with it several times a day verses once a day or (wore) once a week!

This area is for monthly planning. I didn't touch it. I don't even know what to do with it. I'm going to try to delve deeper into all things Uncalendar and really try to utilize this for a goal. I think the reason why I never used it is because I never had any real goals. I wasn't a goal setter last year. I was all talk - and even after awhile that fizzled out. I welcome any suggestions on how you use the area. Please comment, below!


The monthly view layout was consistently used throughout the year. I guess I'm just a Big Picture kind of girl who has no interest in breaking the picture down into manageable goals. (Ironic considering I'm a SPED teacher whose whole world revolves around year-long IEP goals that are broken down into bite-sized pieces). I kept the color-coding - the basic color coding - throughout the year in the month view - blue was work and red was SPED (Hey! I rhyme!) All the other color-coding went by the way side.
Do you see that area on the far left, highlighted in red? This is where I put my weekly to-dos on the monthly calendar. For example, when my son graduated high school this past May, I needed to be sure to get out invitations and announcements and consider sleeping arrangements at the house. I placed these things on my "big calendar". They did not, however, consistently make it to my weekly to do lists.

To make the monthly calendar section easier to use, I used these tabs. They come in four colros: red, blue, green and yellow. I divided my months according to "seasons" (read: as the colors made sense to me). Blue were the cooler months, yellow were the spring months, green were the summer months, and red were the back to school/fall months. I stuck the tabs in the Uncalendar and they never once came loose the whole year (and remember, while the majority of my Uncalendar went untouched, the monthly view got *a lot* of use.) I will transfer these tabs over to my new Uncalendar. If they end up not sticking, I will be buying more. The system really worked for me.

On the very back page of the monthly view is a next-year-at-a-glance page. As a teacher, this page was invaluable to me! Since I began my Uncalendar in January (the middle of the school year), I have future dates that do not fit in my current Uncalendar. January through May/June dates are listed on this page in my Uncalendar and now that I have my new one, I'll transfer these dates over. And, in August, when I get dates for next January through May/June, I will place those dates on this page in my *new* Uncalendar. My only regret is that half of this page ends up going unused. I hardly ever get dates further than a year ahead. I suppose I could use this area for more goal setting in the new year? I will have to give more thought to this. I used color coding in this area too - but very basic. Again, blue for work, red for SPED, etc.


I think my biggest issue with my Uncalendar use this past year was just not using it as much as I should/could have. The phone book feature in the back went completely untouched because - you guessed it - all my contacts were in my phone. This was one reason why I opted for the coil-bound Uncalendar this year. It's more streamlined and it doesn't have a lot of features that the Pro does, but it still has the writing space I crave (but apparently don't use) that the half sized version does not.
My over all opinion about the Uncalendar after one year of "use": I really like it. I will continue to use it this year, too. (Be sure to be on the lookout for a video and blog post outlining my plans for the upcoming year in more detail).

Pros: Blank - start whenever you'd like; spacious - a lot of room to write; durable pages - aside from a few coffee stains, my pages look just as good as the unboxing last December; affordable - with several versions, you can find a planner to fit any budget.

Cons: Blank - a lot of space means there is a lot of opportunity to be overwhelmed; Bare Bones - it's not very pretty as planners go BUT you can always decorate it to your liking; Color Scheme - a lot of people are put off by the red, blue, green and yellow color scheme. I contacted the company and they said that a grey scale was in the works for 2017, so that's promising.  I'll be sure to keep you updated if I hear anything.